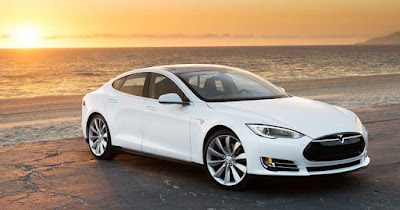 Buy Tesla Motor (TSLA) for the following reasons.
- I'm not a "car guy" bought I just bought a Tesla which was delivered in October.
- When I got it registered, two people working at DMV congratulated me exuberantly.
- I've had construction workers, tailors and jewelers stop me to ask about the car.
- Better than expected quarterly results, stock up 9% after hours.
- Tesla first car company to release auto-steer on a widespread, commercial basis, insuring itself a place in history.
- Release of auto-steer shows ability to take big risks is still intact at Tesla.
- Roll-out of super charger stations creates another huge barrier to entry. Competitors will certainly announce a joint partnership with large chain of gas station at some point but that will require lowest common denominator solution. Meanwhile Tesla already has over 500 supercharger stations and substantial technological differentiation.
- Investment in Gigafactory causing short term strain on capital and stock price but creates giant barrier to entry in the long term.
- Lack of commitment from BMW, Audi, Nissan, Toyota, etc.
- Price is down from $280 because of delays and cost overruns for Model X. I'm betting it's a buying opportunity but it could be the beginning of a trend toward poor product management.
- Bio-defense mode of Model-X appears to be part of plan for adoption in China.
- Consumer Reports gives Tesla a rating of "average". Elon Musk counters that Tesla already fixed those problems and cites that 97% of Tesla owners "expect their next car to be a Tesla" according to CNN Money.